Dissemination Conference for TOUCH – After two years of research into street based youth work across Europe, Newman University in Birmingham is proudly presenting the findings. The overall aim of tackling violence through street based youth work clearly involves giving young people a voice as well as truly listening to what they say. As congenial partners, young people of the streets from the UK, Germany and Austria have been contributing to the project from the beginning. Now it’s time to share the results. An inspiring project, with fascinating voices that need to be heard!

On Jan 09, 2013, at 06:50 (MEZ) the plane with Bridget and Daniela on board leaves Graz International Airport. Birmingham’s calling and radioigel is the only Austrian media representative following that call to report on the research results of TOUCH – a participatory research project on street violence among young people in the UK, Germany and Austria. We are looking forward to great reports!

On tour with Rich 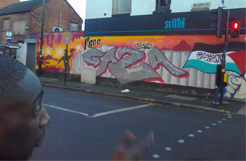 A visit to Alum Rock, the Pakistani community in B-ham. The day after the conference Rich takes us on a tour through Alum Rock. The shops and streets are a flash of colours – from graffitti as well as clothes and fruit on display. „Welcome“ signs flash everywhere. A lady passing by asks shyly if we could take a picture of her, too. The cam doesn’t work anymore by then. It’s too cold… Unfortunately a lot of the recorded material was lost due to technical problems. Here is what we could save. Music: Cartel 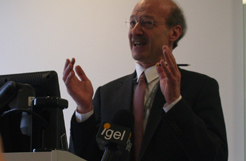 What we remember, hope and call for! 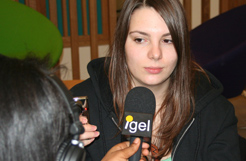 Here you can listen to the young participants from Austria and Germany. That’s why most of this audio-collage is in German (sadly, for our English-speaking visitors). The young people explain what their roles were in the project and what they liked about it (well, they actually liked everything, as it turns out). They also reveal what they would change about the situations they find themselves in if they had the power to do so. A significant, multiply voiced call for politicians to take action! 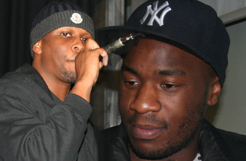 JD and Ginal have been making music together for about seven years. They are the „Chasers“. You can listen to their music via YouTube or visit the Touch website and read the blogs there. Here they talk about challenges, chances you have to take and messages conveyed through their lyrics.

Bradley in and after Concert 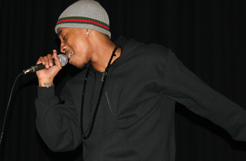 Bradley is one of the young music artists whose songs can be found on an album produced for the Touch Research Project. You can listen to his music via YouTube or visit the Touch website and read the blogs there. Here he talks about what his music means to him. 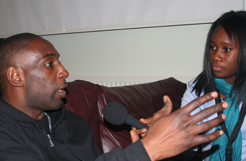 Richard Campbell was one of the peer researchers for the project and is currently doing his Masters. „I grew up from the streets, from the age of thirteen I was homeless, I was involved in gang culture […] so, I understand how young people feel.“ Here he talks about how he runs a studio to give young people a voice – and, hopefully, a career. 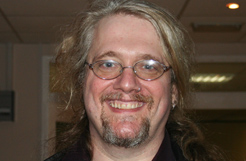 Mike Seal, head of Youth and Community Work at Newman University, offers information on participatory research and plans for the future. On a very personal level he talks about what touched him most in the course of the project. 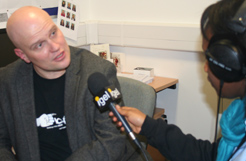 Just minutes before the official start of the conference, Bridget meets Pete Harris, senior lecturer at Newman’s. In the interview he explains what the aims of the project were and how young people contributed. 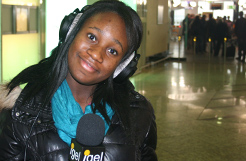 Spontaneous and in love with life, that’s what Bridget (Birgit) Owusu is. Meet the fourteen-year-old Austrian with family roots in Ghana and join her on a challenging trip to Birmingham! Invited by Caritas Jugendstreetwork Graz, she will report on the final conference of TOUCH. Here Bridget and her father talk about their feelings right before take-off in Graz. Music: Cartel 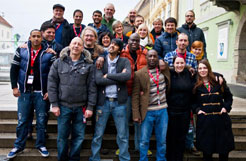 Half time whistle for TOUCH  – Researchers, youth workers and young people of the streets from the UK, Germany and Austria meet in Graz. Tackling violence through street based youth work is the overall aim of the project and participants are working towards that aim together. Lisa, Precious and My talk to Rich and Sabs, peer researchers from Birmingham.