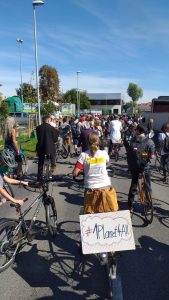 „Earth Strike“ is an international grassroots movement that called for a global general strike for climate action. On September 24th, Fridays For Future called on all generations to take part in the eighth global climate strike . Felix was there and even gave a speech! „There is a lot to do!“ he says.

Listen to his speech, to some interviews during the demonstration and to an interview with a friend of him.