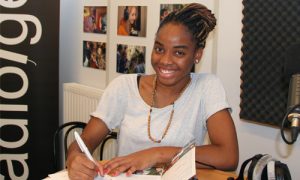 A Research Project with Jugendstreetwork Graz

Responding to Street Violence: Austrian premiere-screening of the documentary on the project, presentation and discussion of the project-findings (AUT/GER/UK 2011-2013)

Precious Nnebedum – now a student of BORG Dreierschützengasse in Graz – has always loved the radio. Two years back, when she was still a student at NMS Webling, she was introduced to Radioigel and to the idea of using the microphone instead of just pencil and exercise book. The idea of giving kids a voice and letting them know that someone is on their side and they are not on their own was what attracted her to join the radio even more. No wonder the radio-maniac fell for it and still returns to the studio years later.

In her latest podcast she talks to three researchers to present the findings of “TOUCH – Streetwise” to a wider audience.

Her first interview is with Graeme Tiffany, Detached Youth Worker and pioneer of the “Community Theory” also used in the TOUCH Project. They talk about the impact of the findings on practitioners, politicians and policy-makers.

Her second interview is with Christine Kyriacou, Detached Youth Work Manager in Islington, London. “The personal best” for Precious, this interview has a very enjoyable, informal touch.

Last but not least, Precious talks to Mike Seal, Head of Youth and Community Studies at Newman University in Birmingham. He is also the principal investigator of the project and offers information on its background, concepts and goals as well as on up-coming research.

The music in the podcast is used to contribute to the message. Unfortunately – due to copyright law – there is no way for us to use the music written by the young people who participated in the project. Here’s to the artists whose music can be heard in the podcast: Deep Shining by Bloody Joe (instrumental); AndOne – Das Ist Alles and Was bleibt by Eine Cliq.

As always, thanks to Jugendstreetwork Graz for the invitation. More podcasts on the TOUCH Project can be found here at radioigel.at.

This website uses cookies to improve your experience while you navigate through the website. Out of these, the cookies that are categorized as necessary are stored on your browser as they are essential for the working of basic functionalities of the website. We also use third-party cookies that help us analyze and understand how you use this website. These cookies will be stored in your browser only with your consent. You also have the option to opt-out of these cookies. But opting out of some of these cookies may affect your browsing experience.
Notwendige immer aktiv

Any cookies that may not be particularly necessary for the website to function and is used specifically to collect user personal data via analytics, ads, other embedded contents are termed as non-necessary cookies. It is mandatory to procure user consent prior to running these cookies on your website.